YAY what a kickass belated bday surprise!! THANK YOU @thepurlingpineapple – you are the Beyoncé of knitting!!! #pussyhat #pussyhatproject #RESIST #knit

An explanation of the visual symbols at play.
For this section I compare formal qualities of two hats used in the presidential campaign to illustrate variations in meaning presented in visual objects: the red MAGA hat (created to show support for the Republican 2016 Presidential Campaign) and the pink Pussy Hat (worn to show support in the January 21, 2017 Women’s March)

While the mission of the women’s march was not explicitly anti-Trump, the experience of making, wearing and viewing their headgear amplifies the meaning and message of each camp. 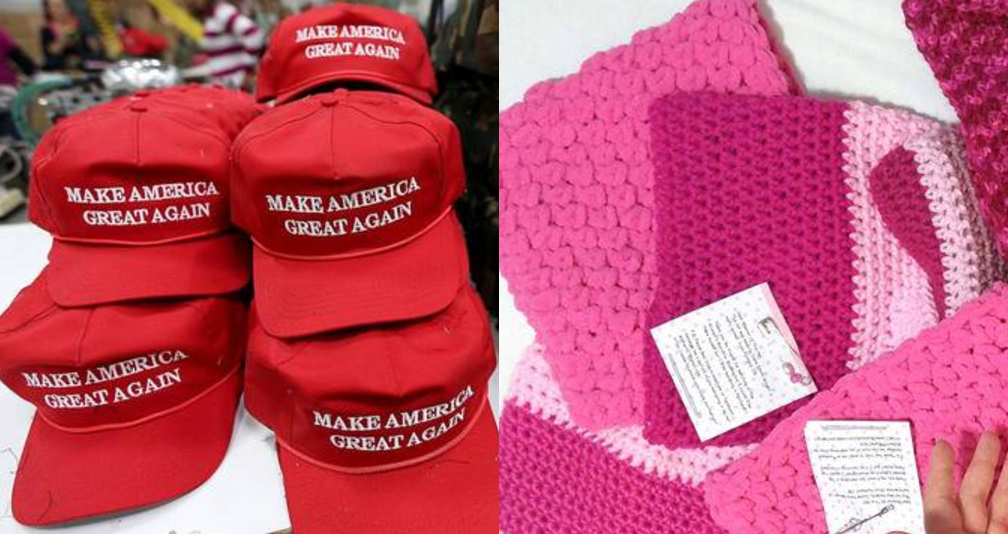 PUSSY hat: PINK, soft, receptive,secondary. Variations of the hue (the color) will recede or advance depending on its tint value, or how much white it contains. Color variation in the hats worn runs a gamut from light to dark, from one unified color, to variations in stripes, argyles etc. Pattern encourages individualism in the making.

PUSSY hat: shape is non traditional (though knitting-tradition is ancient), shape is individualized and flexible (individuals are encouraged to alter pattern to their suit their expression), shape is soft and maleable, no hard edges, although its design does include pointy ears.

MAGA hat: mass-manufactured, machine made, sold by a vendor, bought online and in stores for profit. “Manufactured in USA” is labeled explicitly when it appears, otherwise manufacturing is likely outsourced to least expensive vendor, likely not USA.

PUSSY hat: hand-made by someone in community. The making of the hat intended as an intentional part of the design of the hat as a way to create community. Creative process draws on tradition of women’s work, and knitting as a way to connect. Pussy hats were collected by makers to distribute to marchers, for no monetary exchange. Each piece has small carbon footprint, and is locally sourced (in materials and service), although globally worn and experienced:

“Anja Liseth, 41, who lives in Bergen, Norway, learned about the project from fellow knitters’ pictures on Instagram and promptly spent five evenings stitching five hats. “Made with Norwegian wool,” she said proudly.”

specific language: MAKE AMERICA GREAT AGAIN in bold white font, stands out in strong contrast to the red background and communicates a specific message as dictated by a single originator. The exact mandate message is repeated and amplified as a command as the hats increase in number.